Formed in 1986, we currently have over 500 members. For more information on our services, please see our Membership webpage.

If you have suggestions for any further useful information and/or webpages, please submit them via our Comments webpage.

Here's where you can view some of our slightly older news items... 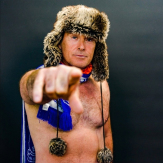 Everton fan, SpeedoMick is on a 2,000 mile, five-month trek across the UK and Ireland ... and is currently in Northern Ireland.

Today (Tuesday) he will be walking from Belfast to Larne.

As well as raising funds he will be looking for charities and good causes to give up to £250,000 to along the way through his charity – the SpeedoMick Foundation. 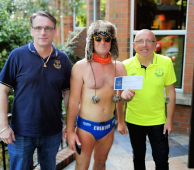 ESCNI has made a donation of £441 (representing a figure of £1 for each of its current members) to The SpeedoMick Foundation … the adjacent picture features William Hewitt (ESCNI Membership Secretary and Sean Mouland (ESCNI Treasurer).

We would also encourage our members to consider making their own independent donations to The SpeedoMick Foundation.

The recent home game against Norwich, on Saturday 23rd November, was designated by Everton as their Supporters Clubs Day...

...as part of this day, ESCNI was represented around the perimeter of the pitch by flag bearers Tamla and Joe Ervine; and on the pitch by Harriet Cross, who was one of the 11 mascots to accompany the team onto the pitch. 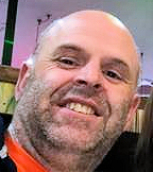 On behalf of our members, the Committee would like to express our condolences to the family and friends of David Lavery.

David (of Aghagallon, County Armagh) passed away on Saturday, 19th February, at the age of just 51.

An ESCNI member of many years, David will be much missed by his wife, Denise, and his daughters Aisling and Orla; together with his travelling companions to Goodison. 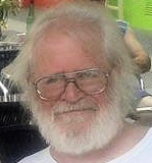 On behalf of our members, the Committee would like to express our condolences to the family and friends of Pat McGrath.

Paddy passed away earlier this morning (Saturday, 5th February), at the age of 70.

An original ESCLA member, he then returned home from London to his native Belfast in the 80s and for the next twenty years hardly missed a match, home or away. He was then an ESCNI stalwart until he moved from Belfast to Liverpool about twelve years ago, in order to be closer to his beloved club.

Pat's funeral will be held at 10.40am on Wednesday 9th March in Anfield Crematorium, Liverpool.

Loganair is stepping in to replace Ryanair's City of Derry/Liverpool flights.

The new service will commence on 24th May.

Initially, there will be flights on four days (Monday, Friday, Saturday and Sunday), with the frequency of flights subsequently increasing to daily from late June.

Flight times will be:

Sean McAllister, from Randalstown (County Antrim), has signed a first professional contract with Everton, penning a two-year deal until the end of June 2022.

A midfielder, he joined Everton from Dungannon Swifts last summer, and is a former pupil of St Benedict's College.

Sean is also a current Northern Ireland Under-17 international.

An update on Sean.

On behalf of our members, the Committee would like to express our condolences to the family and friends of Joe Ervine (from Rathfriland).

Joe will be particularly missed by Tamla (his wife) and Derrick (his fellow club member and brother). Sadly, Joe was only 45.

Joe is being buried tomorrow (Wednesday) with his Everton shirt on. House and funeral strictly private ... full funeral details.

Earlier this season, Joe and Tamla represented ESCNI at Goodison, by being our flag bearers on the perimeter of the Goodison pitch. Our article on this (Everton Supporters Club Day 2019) can be seen further down this webpage. 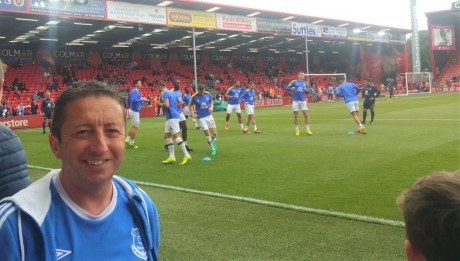 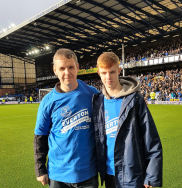 Flybe has announced that it will be terminating its Belfast City/Liverpool service at the end of this year.

The last flight will be on Monday, 31st December ... except for the weekend of May 11-13 when it "will operate to accommodate those football fans wishing to travel to Liverpool for the last day of the Premier League season" ... needless, to say that this is for a Liverpool (also, Man Utd) home fixture!

The last time it withdrew from the route, Everton were at home on the last day of the season and, on that occasion, Flybe provided no such 'rescue service'. 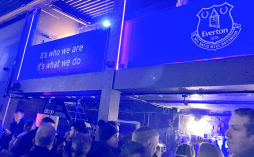 Everton’s Official Supporters’ Club End of Season Event will take place on the evening of Wednesday 9th May at Hangar 34 in Liverpool.

The evening will include several special guests, a complimentary drink on arrival and refreshments available to purchase at the venue.

We have an initial allocation of up to eight tickets for the event; additional tickets may become available closer to the date of the event.

Any members interested in attending should contact us via escni@btinternet.com no later than 5pm on Sunday 22nd April.

Incidentally, Hangar 34 was used by Everton to house an event for season ticket holders earlier this season.

At the behest of Sky, this game has been belatedly selected (less than one month before the original date) for live TV and has been rescheduled to Monday (8pm) 23rd April.

In a nutshell, Sky picked this game, out of the blue, for Monday (8pm) 23rd April because the Arsenal v West Ham game that they had previously selected for the Monday evening slot has been moved to Sunday 22nd April. This has been done in anticipation of Arsenal’s possible involvement in the UEFA Europa League semi-finals on the following Thursday.

We had 55 people booked for this match. Everton hope to announce some sort of compensatory event in due course.

Last season, a game (Watford at home) moved to Friday because our opponents needed a three day rest before meeting possible title contenders (Chelsea) on the Monday...

...this season, a game (Newcastle at home) is moved because another team (Arsenal) might need more than a three day rest before a possible Thursday game...
...whatever next?!
(23 Mar '18)

Today, Ryanair has launched a new service between Belfast International and Manchester.

It is to commence at the end of March and will comprise just one daily flight.

However, as the daily flight times are…

...it is of very limited use to football fans.

If you're looking for an idea for a Christmas present, how about a day-return to the West Brom home game on Saturday, 20th January?

Currently, the total flight price for an adult and two children is only £106.

From the end of October, there will be no more Saturday Derry/Liverpool flights with Ryanair.

Ryanair: City of Derry to Liverpool

A reminder to all of our North West members that Ryanair operate a direct air service between City of Derry and Liverpool airports.

Due to Hull City only taking the allocation for the Lower Tier, Everton will be opening the Upper Bullens Visitors Tier for sale to home fans.

As they go on sale on Monday, and if you haven't already done so, please order your match tickets from our Match Ticket Secretary (Aidan) ASAP.

With the Saturday morning flight relatively dear, why not fly over late Friday evening and stay in this Premier Inn for only £40 per room? It's within walking distance from the airport, and they also do a great full breakfast at £8.99 (with up to two u16s free). 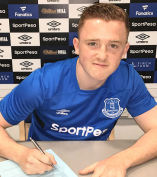 Shayne Lavery (from Lurgan) has just signed a one-year professional contract with Everton, having just completed a two-year scholarship with the club.

The 18-year-old is a Northern Ireland youth international, and was formerly with Glenavon and Portadown. He is also a former pupil of St Michael's Grammar School, Lurgan.

More details of his signing are available from the Everton website.

On behalf of our members, the Committee would like to express our condolences to the family and friends of Colm Rankin.

Colm will be badly missed by his friend (and ESCNI travelling companion) John Hutchman. Sadly, Colm was only 28.

His funeral will be from the family home, 87 Slievemore Park, Derry on Wednesday at 11.30am for 12 noon. Requiem mass will be held in St. Joseph's Church, Galliagh; and interment will be afterwards in the City cemetery ... full funeral details.

Condolences from ESCNI to both families.

The city of Liverpool has featured in many classic films and television series.

If you’re looking for something different to do on your trip to Liverpool, as well as going to the Everton match obviously, why not visit some of these iconic film locations... the Film Set City.

The Minutes of this year's AGM are now available to download from our dedicated password-protected 2016 AGM webpage.

This year's AGM was held on Tuesday (8pm), 8th November and the venue was the King's Head, Belfast.

This year's AGM will be held on Tuesday (8pm), 8th November and the venue will be the King's Head, Belfast.

Remember, all of the associated documentation is available to download from our password-protected 2016 AGM webpage.

Please note that, in accordance with the Club's Rules, all Nominations, Resolutions and Notice of Motions had to be with the Club Secretary by Tuesday, 11th October.﻿ Incidentally, all five of the existing committee members have been automatically re-elected for their existing posts, as no new nominations were received.

The winner of our signed home replica shirt, for renewing their ESCNI membership before 31st August, is Piaras Hagans (of Newtownabbey).

Season 2016/17 will see the start of (up to ten) regular televised Friday evening Premier League games.

The new evening slot is part of the £5 billion TV deal for the next three seasons and could also be used to give relevant clubs an extra 24 hours to prepare for their Champions League clashes.

The televised Premier League packages will comprise the following...

The latest winners of our monthly prize draw are...

For the winners, the choice is between a home match ticket or a replica shirt.